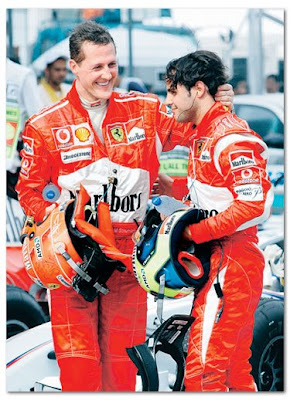 I have been quite buzy with the workloads at the office. I am still trying very hard thinking of what to do for my action research. I have to submit one action research to my Head of Department. Oh my God!! I am out of ideas now! Please help !!!

But last week, just to relax my mind and be away from all the workloads, I watched the F1 on TV. The one in Budapest, hoping that my favourite team, Ferrari and it's driver of course ( who else??) Kimi Raikkonen would be standing on the podium again this time!! I really want to see him on the podium rather than Lewis Hamilton from McLaren-Mercedes team.

Yes, he did stand on the podium but at 3rd placing. It was such a surprise as I did not expect a new driver, Heikki Kovalainen to be standing on the podium for the 1st placing. Normally, it would be either Lewis Hamilton, Kimi Raikkonen or Felipe Massa. But not this time, in Budapest.
Even the 2nd placing went to Timo Glock, also a new name in the F1 championship.

Poor Felipe Massa. His car had engine trouble! If not, he might also be standing on the podium too, that day. Anyway, I am still happy with the result as Kimi was still on the podium last week, even though only for the 3rd placing. Keep up the good work , Kimi!

According to the results for the race in Budapest, for the constructor standings, I am very happy to see that my red team, Ferrari is still on the lead with 111 points, followed by Mclaren-Mercedes with 100 points and BMW Sauber at 3rd placing with 90 points. As for the driver standings, Lewis Hamilton( McLaren-Mercedes) is on the lead with 62 points, followed by two Ferrari drivers, Kimi Raikkonen with 57 points and Felipe Massa with 54 points.

I just hope that the two drivers from Ferrari; Kimi Raikkonen and Felipe Massa will keep on trying to be on the podium at every race. Just like the previous F1 Ferrari driver Michael Schumacher. He is really a great driver! The team has good drivers and I think the team should look at the technical aspect. Try to improve more on the engines and other aspects. So, with good engines and good young drivers, I just hope that they will be the next Schumacher !!!