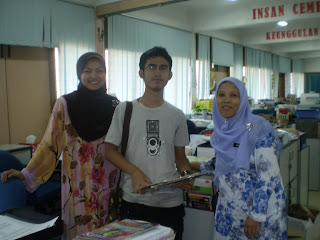 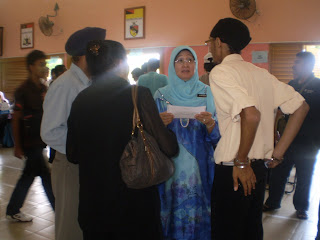 My Principal, congratulating one of the students! 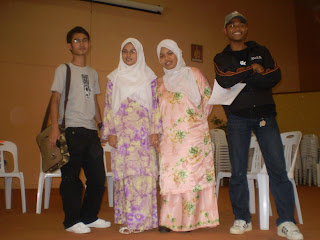 Well done and Congratulations ! The school is very proud of you!

Salam and Hi everyone. Haven't been able to blog these past few days. I was a bit busy as the school holiday is approaching! On Tuesday, 10th Mach, 2009, was the registration day for the Form 4 second intake. As usual, ditugaskan di kaunter semakan. Pendaftaran bermula dari 7.30pagi - 12.00 tengahari. Lama tu! Nampak je senang, tapi tak jugak!

Wednesday, 13th March, ada mesyuarat. Biasa la sebelum cuti ni, mesti ada meeting. 3rd meeting for this year! The next day, training session for the KAT Zon Tengah, this April. I have to train the debate team! Pening ooo! At the same time, I had to settle all my ULBI certs to be given out to all the SPM leavers when they come to take their results on Thursday, 12th March, 2009.

Thursday, 12th March 2009, the SPM results were out! Alhamdulillah, we got 100% passses, with B. Malaysia, Science and Pendidikan Agama Islam with 100% passes. Congratulations to those who scored 8A's, and 7A's.

And starting from this afternoon until Sunday, there is this programme known as 'Program Intensif Masa Cuti'. This programme is meant for the Form 5 students, preparing them for the exam. So, I'll have to be in school, to facilitate. Belum boleh mula cuti lagi la! Berkorban apa saja!

To those who will be going for holidays, 'Selamat Bercuti', kepada yang bertugas sebagai Ketua Pengawas/ Pengawas PTK, 'Selamat Bertugas' dan kepada yang akan menduduki PTK, 'Good Luck and All The Best'! I'll be taking my PTK in August!
By Myza Pesona at 21:56